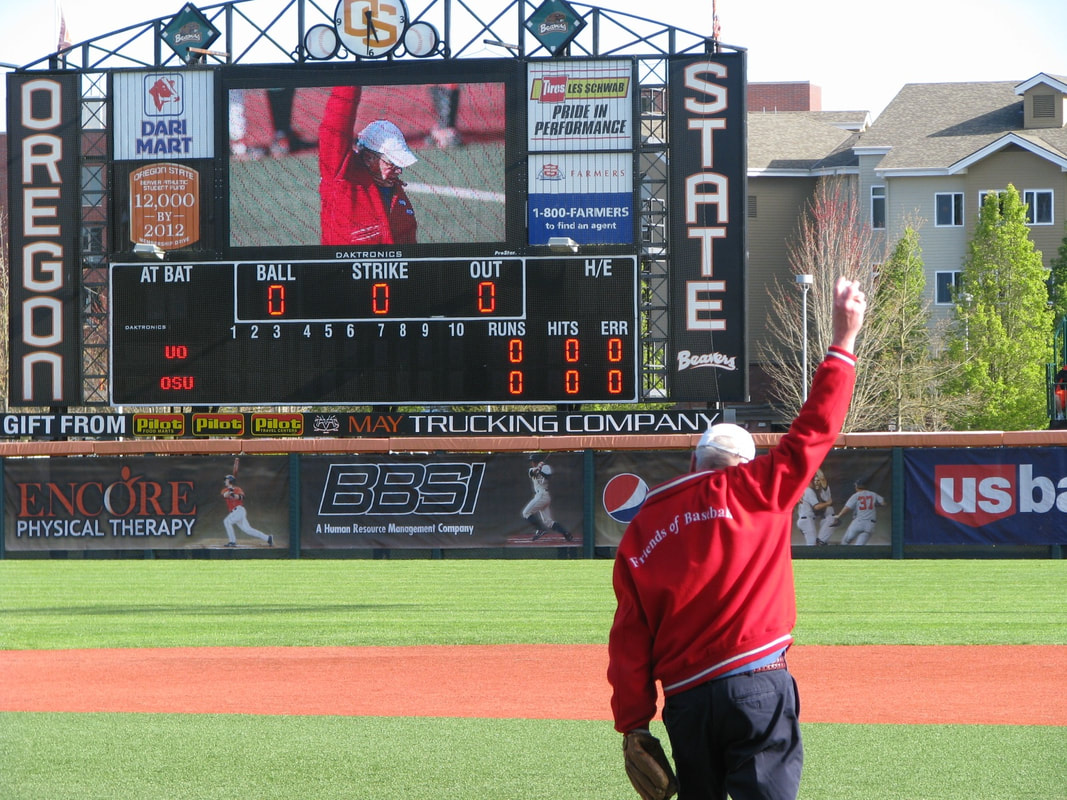 Ben graduated from Pacific Lutheran University in 2001 with a BA in Communications/Public Relations. After nearly 11 years as a communications specialist with WE Communications, he decided to focus more on his family and running Friends of Baseball. He is now building his own business as an independent insurance agent. He also dedicates his free time to his wife, two children, and two dogs. Over the years he has given back to the baseball community through his son Sterling's youth leagues as a coach and former league Board member.
​
“I have always longed to share with others the feeling of team and pureness I had when I played ball throughout youth and high school baseball. Thanks to Friends of Baseball, I am able to help kids and teams experience the sheer joy and purity — the feeling — of baseball. Not only that, I look forward to passing that along to both my young son and daughter in the very near future.”
Jonathan Jwayad - Gala Committee
Jonathan spent his formative years hustling around the base paths for Interstate Little League in North Portland. After receiving All City baseball honors at Benson High School, Jonathan continued his education at the University of Oregon where he played for the Club Baseball Team. During college, he, and three teammates, formed a youth baseball camp called Baseballism. The camp was a success and, in 2013, it was transformed into a lifestyle apparel brand inspired by America’s Pastime.  Jonathan is currently the Chief Operating Officer of Baseballism Inc. and has been instrumental in the company’s rapid growth.  Jonathan has been responsible for the launch of 8 retail locations around the country at such marquee locations as Fenway Park and Wrigley Field.  Jonathan’s greatest pride comes from the fact that Baseballism’s success has allowed the business to donate more $500K in product and cash to baseball organizations, teams, and charities around the world. Jonathan lives in Portland with his wife, son and daughter. He spends his weekends coaching his son’s youth baseball team.
Jason Scott - Program Committee
​Jason is a native Oregonian, and grew up in N.E. Portland, 7th & Sumner to be exact. Jason attended Grant High School, home of the 2018 basketball state champ. Jason started playing baseball at the age of 7 at Riverside Little League. Riverside is where he fell in love with the game and has lifelong friends that he met in the Riverside dugouts in the early 80’s, he also learned that (TEAM) is bigger than (I) in the game of baseball as well as life. Jason is married to Nicole Bragg-Scott who is an Psychology instructor at Mt. Hood Community College and they have 3 boys.  Jason has worked with youth since his days in college in Oklahoma, working with the local high school in Coyle, OK. In his time back in Portland, Jason has worked with youth at Jefferson High School as a coach in Football and brought back the baseball team that had been disbanded for some time. Jason works for Portland Parks & Recreation as the Recreation Coordinator - Teens, Jason feels that his work with PP&R gives him a chance to give back to the community that raised him and held him accountable for his actions.  In his spare time, he enjoys watching his son Play baseball for Reynolds Little League. In addition to baseball, Jason loves the game of golf, enjoys cycling, and can even be found with a fishing pole in hand on occasion.
Jim Abreu - Gala Committee
Although Jim’s baseball career was short lived as a youth, he has very fond memories of competing with his older brother and friends in the Bay Area little league program. Some of his best baseball memories are from attending and rooting on the Oakland A’s during the summers. He’s been fortunate to still be involved in the game, both as a Lake Oswego little league coach and now as a passionate fan in stands, cheering for his son’s Lake Oswego High School team. A graduate of Saint Mary’s College in California, Jim has been in the mortgage business for the past 25 years and is currently a Senior Relationship Manager for First Republic Bank in Portland. He and his wife of 27 years live in Lake Oswego with their two sons who are both in high school.
Sarah Coakely - Gala Committee
Sarah Egge Coakley (Board Member) grew up skiing and golfing in Montana.  However, her baseball acumen has increased exponentially over the last decade thanks in large part to her grandmother and kids’ combined love and teaching of the game. Sarah, along with her husband Matt, have spent many hours coaching and ‘team parenting’ their children’s sports teams.

A Licensed Real Estate Agent in Oregon, Sarah applies her social work and event planning background to ensure she provides exceptional service to each client. She is an excellent listener who is highly proficient at finding resources and offers sound advice.

With 2 school age children, she has thorough knowledge of the surrounding school districts including charter and option schools.  When she is not working, volunteering or chasing after her lovable, naughty labradoodles – you will probably find her cheering on her kids at the ball field.  ​
Pam Knowles - Executive Committee
Pam Knowles is an Oregon native and a Portland businesswoman.  Her love of baseball started when she would play ball with her cousins (20 boy cousins!) and later played intramural softball in college and catch with her sons, who played little league.  She loves to watch baseball and enjoys trips to Arizona and Florida for spring training.  She believes in the power of team sports in the development of young people and is excited to help grow Friends of Baseball.
Pam earned a Bachelor of Science in History and Education from Oregon State University and law degree from Lewis and Clark Law School. She was a partner at Davis Wright Tremaine, COO and General Counsel at the Portland Business Alliance, ED for the Oregon Commission on Judicial Disability and the ED of Industry Relations at the OSU College of Business.  Pam was elected to the Portland Public Schools Board of Directors and served from 2009-2017 including 4 years as chair. Pam is currently advising businesses (non-profit and for-profit) on organizational transitions and development, governance and strategic planning.
Pam is married to David Knowles and they have three grown sons.

JD Kiggins - Program Committee
Emer­i­tus Board
​
Keenan Long­cor (Founder) wrapped up a very brief col­lege expe­ri­ence, choos­ing instead to estab­lish his own sales and mar­ket­ing com­pany. The com­pany grew to encom­pass a five-state area in the Pacific North­west, mak­ing it one of his industry’s largest sales agen­cies in the region. His suc­cess­ful busi­ness strate­gies became a spring­board for his pub­li­ca­tion of INTERPERSONAL, A Sales And Man­age­ment Let­ter, as well as his career as a man­age­ment consultant.
​
“Of all my years in busi­ness, with all its many rewards, my fond­est mem­o­ries are not busi­ness related, but of being with my son on one of our base­ball road trips. We were fol­low­ing his team, fol­low­ing our favorite pro­fes­sional team, all the while chas­ing the moment… and the con­ver­sa­tions found through our shared love of the game.”
Rakeem Washington - Past Board Member
Rakeem is a Portland native and former Peninsula Little Leaguer.  Baseball was cherished in his family—his father was a long-time coach and is in the Portland Interscholastic League Hall of Fame.  His mother kept score for hundreds of little league and high school games while also fueling dozens of his teammates every weekend with an innumerable amount of pancakes.  As a child, he and his siblings and cousins spent summers playing Wiffle ball in numerous Concordia neighborhood backyards.  After lettering for four years at Benson High School, Rakeem played for two years at the College of the Redwoods followed by two more years at Pacific University.   His connection continued as a coach for several summers, most recently in 2013 with Roosevelt High School.
​
Rakeem is a 2008 graduate of Lewis and Clark Law School and practiced as a juvenile delinquency and child welfare attorney for several years before taking a position with Portland Public Schools working on equity issues in school discipline.  He is currently working in the child welfare arena with the Oregon Judicial Department and is also teaching in the University Studies Department at Portland State University.  He continues his support of the community as the Executive Director of the Portland Observer Newspaper, the longest running minority publication on the west coast.
Staff
Gerald Bolden - Mentor/Coach & Program Leader
Gerald Bolden is best known for his professional play in the Frontier League on the Johnstown Steal and Richmond Roosters however he has had a long and varied career. He began at the age of 6 to profess a love of the sport being inspired by his father’s participation on a softball team. He began with T-ball then moved on to Little League and playing on the All-Star team.

He went on to play three years of varsity baseball at Benson High School in Portland, Oregon, and a year at Cañada Junior College in California. After returning to Portland, he played on Taylor Electric, a team in the Pacific International League. From 2000 -2004 he traveled to coach for 5 months out of the year in London, England and in South Africa spending 2 ½ months in each country. In 2002, he coached the Great Britain National Team.​
Molly Newcomer - Communication and Events
Molly grew up in San Francisco, playing school yard kickball, Police Athletic League (P.A.L.) basketball, and intensely competitive backyard whiffle ball. Her dad, a high school basketball coach, fostered an early love for team sports and taught the importance of sportsmanship, perseverance, and maintaining a positive attitude. Molly studied child development at Stanford University, where she met her future husband playing intramural basketball. They have lived in Portland for 25 years and are starting to get used to the rain. Their two children have kept them busy participating on innumerable youth soccer, softball, baseball, and basketball teams. A former elementary school teacher, Molly has also enjoyed coaching and organizing youth basketball programs in northeast Portland. She is excited to be joining Friends of Baseball and helping create greater access to youth sports for all kids.
Copyright © 2021 Friends of Baseball. All Rights Reserved.